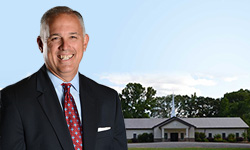 Ambassador Baptist Church is the result of that leading. Beginning with just four other families, Ambassador has become a vibrant and enthusiastic church where the teaching and preaching of the King James Bible is well received.

Today, Dr. Allen is being used of the Lord to train young men and women in the college classroom, as a speaker and counselor in summer camps for children and teenagers, and in other fundamental Baptist churches as a guest speaker.

Dr. Allen and Mrs. Tabatha have enjoyed each other in marriage since 1992 and have one daughter, Lydia.

Now it came to pass in the days of Ahasuerus, (this is Ahasuerus which reigned, from India even unto Ethiopia, over an hundred and seven and twenty provinces:) That in those days, when the king Ahasuerus sat on the throne of his kingdom, which was in Shushan the palace, In the third year of his reign, he made a feast unto all his princes and his servants; the power of Persia and Media, the nobles and princes of the provinces, being before him: When he shewed the riches of his glorious kingdom and the honour of his excellent majesty many days, even an hundred and fourscore days.